OVER YEARS under the same family management 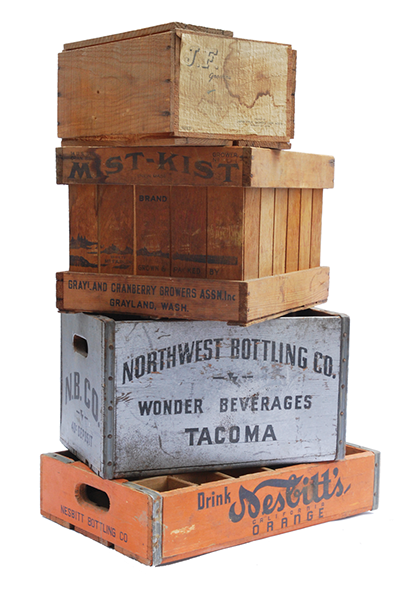 In the wake of the devastating Seattle Fire of June 1889 the majority of Seattle’s business district and waterfront had been destroyed, including Jacob Nist’s employer, Seattle Lumber and Commercial, who had fallen victim to the blaze. This prompted Jacob and his sons: Michael, George, and John J to launch a new enterprise doing mill work and making wood products. This new enterprise was established as the Queen City Manufacturing Company, which became the parent company to Seattle-Tacoma Box Company.
^

Chaffey Box Company, an operation in Tacoma, was purchased to add another location to the organization. This new plant was called Tacoma Box Company

In the first 40 years of operation the company endured fires four times, the Great Depression, labor unrest in the Pacific Northwest and skyrocketing lumber prices

We were heavily involved in support of the war effort by only being allowed to produce products to support the military –i.e. manufactured products, such as wooden boxes for food, ammunition and machine parts. During this time of war woman played a vital role in the labor force as majority of men were off at war overseas.

In 1945 a progression of change started when other products of wood began to gain attention, such as precut furniture products and box spring frames for mattresses.

Our product line expanded to include beverage boxes, shims to support railroad infrastructure after winter months to level the tracks and transport railroad spikes to the workers. These boxes not only served the purpose of transporting the spikes but were also used as firewood by the workers as the railroad expanded cross-continental. Not only did we support the expansion of state infrastructure with railroads, but also the dynamite companies, such as E.I. du Pont de Nemours and Columbia Power, that were tasked with the creation of roads through mountainous regions for the logging industry and later public use.

Wood boxes began to emerge as containers used to ship fresh fish across the United States by railroad, support of the canning industry, and export containers for salmon and fresh shellfish, such as oysters. We began our relationship with Olympia Oyster at this time and to this day they are our longest standing customer that we have the privilege of serving. In the late 50s, the first moving and storage vaults were manufactured, which is still a major wood product we produce to this day.

Brought the opportunity to produce high-quality wooden boxes for the export of Sujiko (salmon eggs) to Japan from remote canneries in Alaska. We expanded into other wooden products outside of just boxes, which included a furniture line to upholster frames, turning squares, and a Northwest specialty, lumber. We developed a packaging solution for the agricultural industry with bins, including both a patented reusable plywood tote bin for agriculture items and the first reusable and collapsible totes for liquids to replace 55-gallon drums used by Dole and Delaney. Our customer service base grew outside of the Puget Sound region.

Expansion both in products available and geographically. From a product perspective brought an opportunity to supply a variety of oil field items such as a plywood container to protect and ship drilling mud and packaging of building components that were used for construction of the buildings on the North Slope of Alaska. Our patented pipe package and process was used to bundle and secure the pipe destined for the oil fields in Alaska and operations worldwide – Japan, France, Singapore, Denmark, Texas, Pennsylvania including others were all countries a part of this program.

Following the Seattle fire on September 15th, 1973 the company traded the property in Seattle for acreage in Kent, WA where they consolidated the two companies at a new plant.

In a joint venture with Pacific Container Corporation, we bought the assets of Menasha Corporations corrugated box plant in Tacoma, WA, and started manufacturing corrugated boxes at our facility Commencement Bay Corrugated (CBC).

Our wood manufacturing plant was still humming along with major products focusing on packaging for the North Slope of Alaska, mattress frames for national accounts with a growing focus in agricultural products in Eastern Washington, and along the West Coast. The drilling mud program and process with pipe packaging were still expanding worldwide as a great solution for the oil fields.

We made a contract with Capilano Plastics to distribute Roe pails as the wooden salmon roe boxes were being replaced with plastic Sujiko pails and lids.

Commencement Bay Corrugated was moved to a new facility in McMillan, WA with a steady growth of new customers and a state-of-the-art corrugator being installed.

These years saw the formation of SeaCa Packaging, a California Corporation, that began supplying wooden and corrugated packaging to the agricultural market in 1991. By the late 90s SeaCa had settled in Stockton, and Fowler, CA to service the cherry, juice, stone fruit, and asparagus customers of Central California. In the North, we helped lead the transition out of wood into corrugated then into high graphic corrugated being produced at CBC. In the Southern region, we developed a folded bliss box to help solve agriculture customers stacking challenges. This transition included accompanying packaging with service and machine programs to erect the boxes to help production efficiency. Trayco Manufacturing, a New Zealand branch, started supplying wooden box shook and finger-jointed studs/material for moldings and door cores to support the Kiwi customers.

The first year we manufactured wooden storage vaults for Door to Door storage.

Our wood plant expanded to include a manufactured stud program for the construction industry.

We had our first MAP trays manufactured for packing Ikura (salmon eggs) in Alaska for export to Japan.

STB spent 2010-2020 growing our corrugated business in agriculture and food services all over the western us and with the completion of the first 1500 Linear ft corrugator installation in 2019. We now have the capacity to run over 2 billion sq ft per year making our plant one of the largest independent manufacturers in the United States.  Always wanting to stay on the leading edge of quality and service we have in the works 4 major machine upgrades over the next 3 years – including a die cutter, a multi-color flexo, and a high-speed gluer.

CBC has been committed to being a “yes” company to solving customer challenges and design objectives. This was the first year they reached a billion square feet.

First full year manufacturing a sustainable packaging alternative to wax boxes with the creation of our plastics division, SeaCa Plastic Packaging, which produces polypropylene (PP) corrugated packaging for the seafood and produce industries. Business has grown an average of 35 – 40 % every year and now ships 2 million pounds per month.

Plastics moved into their new home of 150,000 square feet in Surprise, AZ.

We are pioneers in the establishment of a closed-loop collection program to recyclable pp cartons. In order to reach our goal of incorporating a minimum of 25% post-consumer (PCR) plastics into our packaging, we are partnering to establish a new recycling plant to support that encompasses all necessary elements to have the collected PCR be FDA approved.

Beginning with Jacob, six generation of Nist family members have made contributions to the success of Seattle-Tacoma Box Company.